Rural vs Urban Living - Budgets and Net Worth 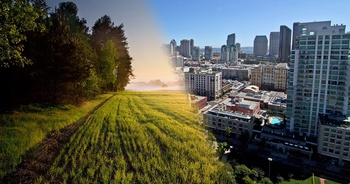 Thinking of moving someplace far away? Here are the differences between rural and urban living in terms of budget, housing, net worth and lifestyle.

Whether you’re thinking about moving to the city or away from a city, it is good to know what kind of budget items you’ll be looking at and how they differ. Living in a rural area isn’t always as cheap as people assume.

Let’s start with some data from the Bureau of Labor Statistics analysis of urban vs rural living costs. These statistics come from US Census data, which considers areas inside of metropolitan statistical areas (MSAs) “urban” and those outside MSAs “rural.” It’s not a perfect measure, but it’s usually not clear exactly where the city ends and the country begins, so you have to draw the line somewhere.

On average, households in urban areas earn $15,779 more than households in rural areas but they also spent $7,808 more than rural households. That leaves urban households have an extra $7,971 to save or invest. According to our Income Spending Simulator, over a period of 30 years, if that money were saved at rate of 5% it would add up to an additional $667,000 in net worth! However, the deeper you dive into the differences between urban and rural households, the blurrier the lines become in terms of which place is better for your budget and net worth.

There are large differences between rural and urban living in terms of the cost of housing, home ownership rates, and the percent of homes with a mortgage.

The differences between rural and urban living arrangements can explained by a few structural elements to rural life.

Rural home ownership rates indicate a stronger leaning towards building net worth. Buying a home is a hidden form of forced savings. The data shows that rural households are more debt averse with over 50% owning their home free and clear. The saying “bet the farm” is no joke. For many people it is practical to live on and own the acreage they farm or ranch. If their property is tied to their livelihood, having it paid off in full eliminates their risk of being foreclosed on and losing everything.

In terms affordability of housing, it varies place to place. The people at Nobel Datum put together an excellent set of interactive maps showing housing affordability, property tax rates, and estimated disposable income per state and county. 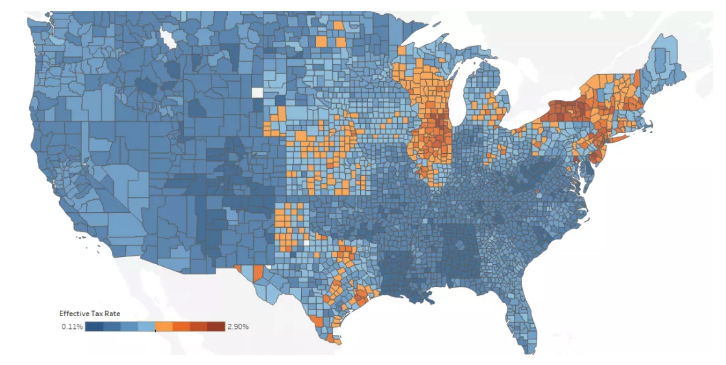 Food and Eating Out

If you live in the countryside there are fewer options for eating out (and may take longer to get there), so you are eating at home more. The budget data shows the difference.

Rural households spend more on food at home but have about 6% lower overall food costs - largely because they spend so much less money eating out. The money saved dining out may not be because of how frequently people eat out in rural areas but instead due to the low cost of living (low wages = lower tab), and simpler places to eat vs pricey urban restaurants.

All in all, the rural and urban spending patterns are pretty close. Rural life is 8.6% cheaper on the budget on average(excluding housing and food). Much of the differences appear to be noise. Some are structural given that in rural areas housing is cheaper, which means wages can be lower, making personal services also cheaper (like haircuts, lawn mowing, etc).

You’d think transportation would be more expensive in the countryside because of the larger distances but it is only 4% more on average. Rural households are only 6% more likely to own a vehicle. Keep in mind cars and trucks are depreciating assets, which have a hidden drag on net worth.

Statistics only tell part of the story—there’s also room for some anecdotal evidence and common sense when thinking about the difference between urban and rural budgets and net worth. Many rural households have to spend both more time and money maintaining their home—including repairing septic systems, grading driveways or digging a new well. Those are expensive projects that urban households never will have to tackle. Rural homes can be on 300 acres or on 3 acres, and that makes a big difference in both the price of the property and the maintenance it requires. There is also a DIY (do it yourself) spirit that comes with living in the countryside which may indicate why ‘services’ and ‘other’ spending are so much lower vs urban counterparts.

In terms of lifestyle rural areas often has less access to healthcare, schools, libraries and other public services—some rural areas even lack public safety services like fire and police. On the flip side, taxes are usually much lower in rural areas (which directly translate into lower housing costs as we saw above).

It can be harder to make a living in rural areas—which might be why rural workers are dramatically more likely to be self-employed than their urban counterparts. That means that having some business sense is important if you’re living in a rural area.

The bottom line is that where you live definitely impacts your net worth, but it’s just one piece of the puzzle. There are expensive rural homes and cheap urban homes as well as expensive and cheap vehicle options and ways to reduce per-mile costs… There are ways to build your net worth and increase your financial stability regardless of where you live - so that’s a decision that should be based on your lifestyle preferences and career options, not whether or not you’ll be spending more on housing.

The post Rural vs Urban Living - Budgets and Net Worth is part of a series on personal finances and financial literacy published at Wealth Meta. This entry was posted in Personal Finance, Budgeting
Previous Post:

Are all the costs monthly?

Are all the costs monthly?

@Teyla -> correct, the costs are yearly.