How Much Does Your Ride Really Cost?

We all know that owning and operating a car costs money. But not everyone realizes how much, or how large the difference between types of cars can be. The main categories to know about are depreciation, gas mileage, insurance, interest and maintenance.
Wealth Meta
https://www.wealthmeta.com/
Emily
/users/a762179f6fcbaf0ffa4e60eeb0566d07/emily
April 30, 2018, 9:47 p.m.
Aug. 25, 2017, 6:56 p.m. 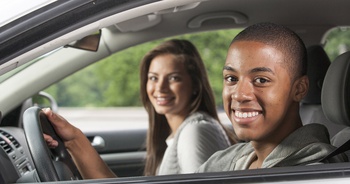 A certain member of my family is very proud of her frugality. Yet when I asked her how much she spends on gas (she drives a gas-guzzler), she didn’t know.

We all know that owning and operating a car costs money. But not everyone realizes how much, or how large the difference between types of cars can be. You don’t have to be a particularly savvy customer to compare sticker prices of a new car, but taking into account all of the following requires a level of sophistication that not all car buyers have:

In this post, I’ll mostly be talking about the five-year cost of ownership, or the annual cost of owning a car in its first five years, assuming you bought the car new. That’s the standard metric used by researchers to discuss the ownership costs of individual car models.

Cars are not like real estate. They lose value over time (and with use). The largest cost in car ownership is depreciation, or the difference between what you paid for the car and what you’ll be able to sell it for. This amounts to about 50% of the car’s cost over the first five years. Every day a car loses a little bit of value due to deprecation. This is due to the mileage increasing and also the effect of time. Depreciation especially jumps up for a model if it is discontinued or a newer body style comes out.

In reality the actual depreciation is not linear. Cars lose the most value in the first year. In fact a new car loses the most value the minute it is driven off the car lot! That is because car dealers have more power over pricing, are experts at selling, and their cars are truly new. If an individual tries to sell a ‘new’ car with 2000 miles on the odometer, it is in fact a used car at that point. Buyers may think it is a lemon or something really strange happened to it, so the price sinks…

Cars depreciate slower as they get older, which is why holding on to your car longer is the best way to decrease your overall car ownership costs.

Here is a graph of depreciation for a few models: 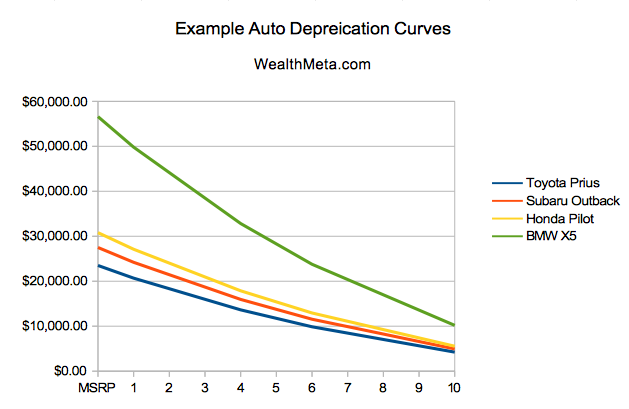 After depreciation, fuel is the single biggest expense for car owners, accounting for about 25% of the ownership costs in the first five years of the car’s life.

It’s a no-brainer, then, that fuel economy matters. Driving a Prius, which gets more than twice the gas mileage of most SUVs, will dramatically reduce the cost of fuel. The Prius is often near the top of lists of the cheapest cars to own for precisely that reason.

Here is a table of what a few example vehicles will cost in fuel, assuming $2.75/gallon and 12,000 miles driven per year:

* The Highlander AWD Hybrid is an interesting case. Toyota sells the hybrid model for about $2,000 more. In this example, over 5 years it saves $1332 in fuel. That is not enough to make up for the extra cost of the hybrid system. But if fuel prices spike it pays for itself more quickly. There is also the feel good eco-conscious aspect of owning a hybrid car (reduced CO2 emissions, spend less time buying fuel, etc).

How much interest you pay on an auto loan is directly related to how much the car costs, of course, although other factors like how old the car is when you buy it (interest rates for new cars are lower than for cars more than three years old) and your credit score come into play. On average, interest payments on loans make up about 11% of the five-year cost of owning a vehicle. Our auto loan calculator will help you determine how much you’ll pay interest.

For un-savvy buyers, insurance can be the dark horse. Insurance rates vary dramatically depending not just on your driving record and where you live but also on the car you are insuring. Insurance underwriters assume that a fast, sporty car is going to be driven more recklessly than a minivan, and they price accordingly. Be informed about the differences in insurance costs before you set your sights on a particular vehicle.

The Insurance Institute for Highway Safety (IIHS) publishes data on insurance losses by make and model. Not surprisingly small sports cars have higher insurance rates than family wagons. The data reveals interesting trends about not only insurance rates, but the safety of a vehicle from the perspective of the insurance companies.

Maintenance costs definitely increase as a car ages and gets more mileage. While it’s hard to know how a 2017 Toyota will run in 20 years, there is plenty of data about how Toyotas do as they age. If you’re buying an older car or just want to know how a new car is likely to hold up, Consumer Reports publishes extensive data on reliability for older cars. You can also read Car Complaints, and check for safety recalls at SaferCar.gov.

Buying a used car (even 5-7 years old) is a great way to avoid depreciation. However that savings comes with hidden risk! Breakdowns on used cars can easily get above a thousands dollars, especially for things like automatic transmissions, AC Units, computer modules, etc. In addition to regular oil changes, cars need tires, brakes, fluids, timing belt changes, etc. If you are going to buy a used car, look for one that is still covered by a factor warranty, has had all scheduled maintenance, has never been in a wreck, and absolutely get it fully inspected by an independent mechanic!

So how much does it actually cost to own a car? It varies dramatically between models. The cheapest car to own, according to Consumer Reports, is the Toyota Prius C, which comes in at about $5,000 per year for the first five years. The most expensive is the BMW 750Li, which costs a whooping $21,500 per year for the first five years. KBB puts out an interactive tool that ranks 5 year cost of ownership for vehicles in every category.

In general, the categories work out to the following percentages over the first 5 years:

Reducing your costs of ownership is simpler than assigning a price tag to car ownership in general. The cheapest cars to own are those that hold their value over time, have good fuel economy and have low insurance rates. As with so many of our decisions in life, cost is only one of the factors in our decision about which car to drive. If you’re a savvy car shopper, however, you can make sure the financial piece of the equation is correct when you decide which car to purchase.

Here are some ideas for reducing the cost of ownership for a car:

The post How Much Does Your Ride Really Cost? is part of a series on personal finances and financial literacy published at Wealth Meta. This entry was posted in Personal Finance
Previous Post:

How Much Is "Enough" for Retirement?