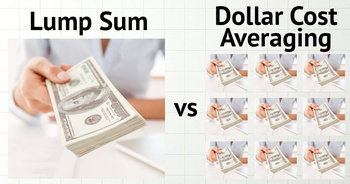 Let’s say you have $12,000 cash to invest in the markets. What is the best way to deploy that money - all at once or spread out over time? It depends on your risk tolerance. Our calculators shed some additional light on the subject.

Lump sum investing - the entire amount is invested in one go.

Dollar cost averaging - the full amount is broken up into a series of payments that are invested over a period of time.

Let’s explore two different scenarios and see how the numbers come out when investing $12,000. Both scenarios will run for 10 years. The lump sum scenarios puts all $12,000 in up front. The dollar cost average scenario contributes $4,000 a year for three years. The average resulting balances are taken from our Saving for Retirement Calculator.

With dollar cost averaging the calculator shows you end up with about $5,500 less vs lump sum!

Dollar cost averaging is lower in this case because keeping the money on the sidelines, on average, reduced the positive effects of compounding. In this example being risk averse ended up being expensive in the long run. One small caveat about the calculators - while sidelined the cash was assumed to earn zero interest. This has a minor impact. If you increase the contribution by 2% per year the average return increases by about $82.

Even in the conservative portfolio dollar cost averaging yields ~$2,700 less vs lump sum! This is not as bad as before because the rate of return on bonds is generally lower than stocks. As such the effect of missing out on compounding is reduced.

People who take advantage of their employer’s retirement plan are essentially using a form of dollar cost averaging. Imagine contributing $1,000 per month, or $12,000 per year, for 10 years to a retirement plan at work. That is a total of $120,000 in contributions. The idea of lump sum investing isn’t applicable here because those contributes are coming out of each paycheck as the money is earned.

If you are interested in delving into the details try the calculator links above. Also check out our Income Spending Simulator a tool we created for budget and cash flow modeling.

The post Is Lump Sum Versus Dollar Cost Averaging Better? is part of a series on personal finances and financial literacy published at Wealth Meta. This entry was posted in Financial Literacy
Previous Post:

How Asset Allocation Is Related to Net Worth and Risk

Why Home Ownership Is No Longer the American Dream