Is It Better to Be Hourly or Salary? 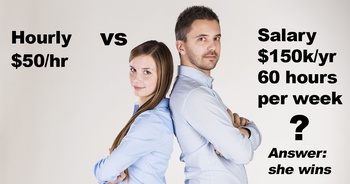 In terms of raw take home pay, hourly can be much better compared to a salaried job with long hours. Salaried people should know their equivalent hourly wage especially when working more than 40 hours per week (we show how to calculate that below).

My experience tells me in addition to money it is more important to consider the “second paycheck” that comes with the job and the kind of people you’ll be working with. Hourly has been my preference, and to this day I’m wary of overly demanding salaried positions because they are so brutal.

A Brief History of Hourly vs Salary:

Historically speaking, per the Fair Standards Labor Act of 1938, salaried jobs were created for “white collar” workers. Today that definition includes executive, administrative, professional, computer, and outside sales employees. Salary jobs are exempt from overtime pay, as opposed to “blue collar” jobs that are required to pay overtime. Companies generally want to put people on salary if they can. It is simple for payroll and it lets employers squeeze people without having to pay them. On the flip side many companies want hourly contractors so they can avoid payroll taxes and liability. Given all this the “white collar” vs “blue collar” designation is not as clear cut as it used to be. There was a famous lawsuit in 2008 by Starbucks assistant managers who were not being paid overtime even though they were making coffee and cleaning the bathrooms as part of their “management duties”.

* Compensation is All About Hourly Take Home Pay:

There is a third category called salary non-exempt, which pays a base salary plus an hourly overtime rate when a person works more than 40 hours in a week.  Salary non-exempt combines the best of both side.

How do we convert from salary to an equivalent hourly wage?

How do we convert from hourly to an equivalent salary?

You get Two Paychecks from your job:

Your first paycheck is what the company pays you, plain and simple. If you are salaried, adjust it to hourly take home pay so you have an apples to apples comparison. Above I explained how a salaried person being worked to the bone is earning a lot less per hour than you might think.

Your second paycheck is what you get out of the job in addition to the paycheck. These are things like health care, vacation time, training, and free food. Often times salaried people get better benefits and have extra perks and flexibility.

Consider running a quick errand during the workday like a doctor’s appointment. A salaried person may be able to visit their doctor without any questions asked. Whereas an hourly worker who punches the clock would have to ask permission and take vacation time, or make up the hours later.

The second paycheck also involves company culture, job satisfaction, and how personal time away from work is treated. Do you even HAVE free time given the job? Is the job close to your house or do you have a long commute? Do you hate going to your job or being around your co-workers? Are you stuck on planes trains and automobiles all the time? A poor work environment can really eat away at a person’s health, causing headaches, ulcers, hemorrhoids, and all the “industrial diseases” prone to middle managers.

Hourly vs salary may not factor into this much, except what happens when there is too much work or a big deadline or some client throws a curveball into the project.

No matter what, hourly employees get paid for every hour worked and in some cases overtime. I don’t mind working extra for a deadline or an emergency, but I sure as heck want to get paid for it.

For salaried people, economically speaking, employers have a clear incentive to push them hard since it doesn’t cost them anything extra. There are limits to this, and companies don’t want to lose good people, but it varies place to place. If it is crunch time salaried people are expected to be there. Doesn’t matter if it is a weekend or holiday. When salaried people work on those days the business doesn’t owe them anything more. That idea makes me pretty uncomfortable because it allows management to be lazy or let “crunch time” become normal. I might be okay being salaried at a large public institution where they are more laid back, but being salaried at a bay area startup would be brutal.

In my opinion, free time is one of the most valuable things a job can give you. Because of that, my strategy has always been to stay hourly and avoid the incentives any boss has to push salaried people (since it doesn’t cost them). Don’t get me wrong, I work really hard and it doesn’t feel right to work less than 40 hours per week. But I couldn’t work a job that didn’t allow me to clock out, relax, spend time with my loved ones, recuperate from stress, and live my life.

When an Hourly Worker Gets "Promoted" to Being Salaried:

Often times management will want to convert a diligent hourly worker into a manager, give them a fancy title and a 10% raise. What is implied is the new job requires at least 50 hours per week at the office instead of the normal 40.

Let’s look at this in terms of hourly take home pay:

Say the $50/hr person accepts the promotion. Now they are getting $114,400 per year, but also working 2600 hours per year instead of 2080. That takes their effective hourly rate to $44/hour (114400 / 2600). So the promotion was actually a 12% pay cut! Not to mention 10 hours per week of personal time that could go into family, hobbies, sleep, fitness - is completely gone. Losing self care time not only screws up a person’s physical and mental health, it also puts stress on the other people in their life since they have less time for them. When you are young and single it isn’t such a big deal, but when you are married and have kids it is a huge consideration.

When “More” May Not Be Worth It:

Yes the salaried person earned “more” than the hourly person, an extra $10,400 to be exact. But let’s break it down into what they could actually spend or save after taxes. Consider the extra income is taxed at a higher rate! Say their tax rate is 40%. The salaried person only nets an addition $6,240 after taxes, but had to work 520 extra hours to get it. That comes out to $12.00 / hr for the “extra” hours. In reality it isn’t that simple, maybe the salaried person loves putting in all the time at the office? Seems like that wasn’t a very good deal for the person? Thoughts?

The post Is It Better to Be Hourly or Salary? is part of a series on personal finances and financial literacy published at Wealth Meta. This entry was posted in Personal Finance
Previous Post:

Can (And Should) You Retire Overseas?

Twelve Reasons I Sleep Well at Night While Investing