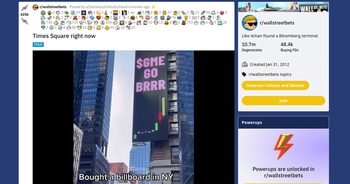 The subreddit r/wallstreetbets is in the limelight for numerous reasons at present. Known as WSB (wall street bets) it was established back in 2012 and was a relatively quiet sub for many years. It rose to prominence during the initial period of 2021 for its noteworthy contribution in the Game Stop (GME) short squeeze that occurred subsequently.

The trading strategies in this subreddit are intense - high risk / high reward. The comments are filled with profanity and strong language. The key word is “bets” in the name as it encourages speculation as opposed to investments. Keep in mind, its byline is “Like 4chan found a Bloomberg terminal”.

First of all, you won’t know what the heck is going on if you try to read WSB like a normal person.

The WSB subreddit is renowned for the colorful language and slang the users indulge in. It is downright misogynistic, abusive. While funny at times some people might find it disgusting.

Here is a glossary of terms to help you decipher the jargon in WSB:

Let’s take a step back and review some terminology so we can put WSB action in perspective. It is important to be able to mentally separate speculation, gambling, and investing. Although all involve betting on something we can understand the key differences between them upon deeper observation.

Speculation is about short term future price movement (up or down). Generally the idea is to make a quick profit. Most of what you see on r/wallstreetbets is “recommendations” to speculate on a given meme stock.

Traders on r/wallstreetbets often use cheap out of the money options that expire soon to speculate on price movements. If it goes their way, the % profit can be huge (1000%+). In this way they are using maximum leverage, which only increases the risk of a 100% loss by the same factor. No risk = no reward. For example there are reported cases of users taking out college loans to bet on high risk options that will either make them completely broke (99.999% chance) or super rich (0.0001% chance).

Gambling is an activity in which you wager your money against other competitors in a bet dependent on chance and probability. However the main difference between gambling and investing is that a gambler will gradually lose their funds as the rounds progress because the house always has a small statistical advantage. The house advantage is present in the way a roulette wheel is designed, or the code in a slot machine. With blackjack or professional poker the house advantage is arguably not as bad, but you get the idea.

With investments fees do come into play, but these are minimized for long term investors.

Assets play the primary role in investments. That is to say investing is tied to an actual tangible profit earning vehicle, as opposed to a chance outcome or short term price movement. An investment may involve stocks, mutual funds, bonds, real estate and so on.

As compared to gambling or speculating, investments prove to be more beneficial for an investor with a long-term vision.

A lot of the due diligence on WSB looks like it advocates for investing, and perhaps it does in some small way, but mostly what WSB is about is pure speculation.

Even considering the foul language, massive losses, and juvenile humor there is a surprising amount of interest in tracking what is popular on r/wallstreetbets. Coders have created tools to analyze sentiment, ticker mentions, comment frequency, etc. Here are a few example sites that mine the data in WSB:

Have fun browsing r/wallstreetbets - AT YOUR OWN RISK! You might be better off reading The Onion, taking investment tips from Bubbles on Trailer Park Boys...

The post Wall Street Bets and Speculation vs Investing is part of a series on personal finances and financial literacy published at Wealth Meta. This entry was posted in Financial Literacy, Risk Reduction
Previous Post:

How Your Budget Compares to the Average

Budgeting for a Family Trip to Europe