Inflation - Why Prices Usually Go Up 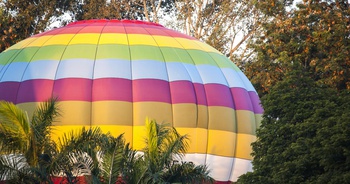 Have you ever noticed that prices are slowly rising all the time? That effect is called inflation. We’ll discuss where it comes from and how to make it work in your favor, or at least avoid the downside it comes with.

Here’s an example of inflation. When I was a kid, a Snickers bar was about $0.20. Today it is almost $1.00. So what happened, is the dollar worth less?

Yes, the dollar is worth less!

A better way to explain it is the dollar has less purchasing power due to inflation.

Purchasing power is the reality or substance of what the money buys (the candy bar). The $0.20 or $1.00 face value is just a number, it’s fake, and is only valuable because of society’s collective confidence in the dollar.

The technical explanation for inflation is 'an increase in prices and fall in the value of money'. See it in action in our inflation calculator. 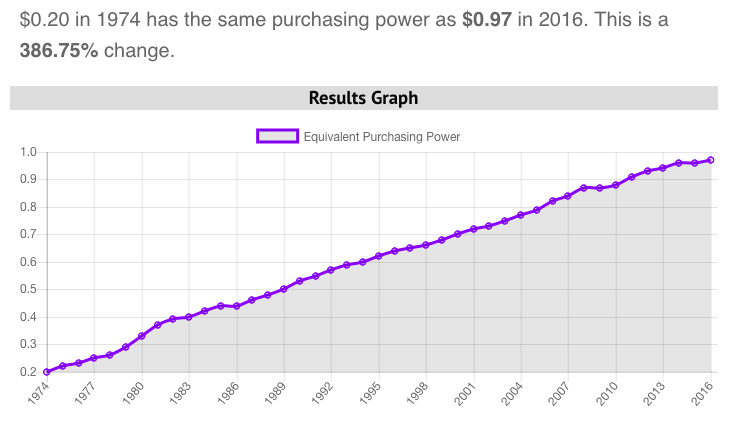 1) Too much demand - too many people competing to buy the same thing.

Demand pushes up prices when an economy is at full employment. Think the good times, the dot com boom, the roaring 20’s, etc. Everybody has money in their wallet or access to loans so they feel confident. When consumers are confident they go out and spend spend spend - driving up prices in the process.

2) Supply costs - prices of wages or raw materials go up.

This can happen in good or bad times, but no matter what the corporations pass the cost of higher inputs to their customers. That causes prices to go up even in bad times because workers will turn around and demand higher wages. A popular example of this is the US oil embargo in the 1970’s which help to spike inflation (for more see https://en.wikipedia.org/wiki/1973_oil_crisis).

3) An increase in the money supply - in basic terms the government printing money.

When additional money is printed by the government, this dilutes the value of money consumers hold. It also makes the debts the government owes a little easier to pay.

Governments print money in a variety of ways, sometimes printing actual paper money, but more often buying back treasury bonds, or adjusting the reserve ratio (which is how much banks can lend out based on the amount of capital they hold).

The reserve ratio ties into lending and is a major factor in how inflation works. For example if a bank has outstanding loans of $100M, and the reserve ratio is 15%, the bank must keep $15M on hand to satisfy withdraws. However, if the reserve ratio were lowered to 10%, the bank would only need to keep $10M in reserve, and the extra $5M would be in circulation going towards cars, houses, college, etc. All that lending translates into consumer spending, which stimulates demand (point #1) which also works to drive up prices. The lending also drives up bank profits, which leads to more demand for yachts, sports cars, etc.

The bad news is inflation isn’t ever going away. A little inflation is seen as a good thing by the powers that be:

Pretty much all countries with sizable economies manipulate their money supply to try and steer inflation. In economics it is called Inflation Targeting. The idea is a little inflation is good for the economy. The theory goes that a little inflation helps stave off deflation in a serious downturn which makes the economy more resilient. Also recall that inflation makes the debts of a country easier to pay back. In effect inflation is a hidden tax on those holding cash! Governments LOVE to tax people, especially in creative, invisible, and hard to understand ways such as inflation.

However, deflation is scary and far worse than a little inflation!

Deflation is the opposite of inflation - when prices go down. For anybody holding a loan deflation is a disaster because that means their monthly payments effectively go up, and this squeezes out other spending. Deflation is especially bad for big businesses who have lots of debt, and for the banks that hold those shaky loans. When loans start going bad, there is a domino effect of reduced lending, which in turn reduces economic activity, which in turn makes it harder to get a loan. This kind of unwinding happens in all recessions / depressions, and effectively shrinks the money supply. Deflation is great for renters (lower monthly rent), or people with a large stockpile of cash, but in a deflationary environment wages are probably also dropping, stores run low on supplies, and your favorite shops close down.

So how can you benefit from inflation?

With inflation, for the average person, it is mostly about limiting negative exposure vs profiting directly.

When inflation spikes, lending rates tend to spike as well. That means payments towards variable rate loans will go up (think credit cards and adjustable rate mortgages). When it comes to debt, the best way to avoid getting hurt by inflation is to get fixed rate loans for everything (mortgage, student loans, auto, etc).

Assets that get killed by inflation are typically cash, savings accounts and long term bonds. The cash loses value due to the reduction in purchasing power like we saw the candy bar. With cash in savings accounts, money market funds, and CDs the rate of return the bank gives you is almost never above the rate of inflation - making the real return on cash and CDs negative. Long term bonds lose value in times of inflation because interest rates go up. With a long term bond the rate is locked in making the old bonds less valuable relative to new bonds that are issued at the now higher rate.

Historically stocks will keep up with inflation, but they come with risk of their own. In general it is all about diversification and not having all your eggs in one basket. See our Retirement Nest Egg Simulator, which accounts for inflation and lets you play with different asset allocations (stocks, bonds, cash).

Returns on gold and silver can be correlated with inflation. That is, in times of high inflation, precious metals will go up in price. This is driven by fear and greed in the markets. Commodities are also said to go up in price (not value) during inflationary periods. However these are directional bets that are more like gambling than investing.

One way really rich people benefit from inflation is to get into a situation where they've borrowed money at a fixed rate and over time inflation has kicked in and eaten away at the ‘real value’ of that debt. Many big businesses are debt financed in a way that sets them up to win because of inflation. Real estate moguls who borrow millions of dollars to finance large projects over decades benefit directly from inflation. If they buy a skyscraper that barely breaks even on rent at today’s money they are set up good. They know that in 20 years, the rent for an office will be roughly double (in part due to inflation), not to mention the value of the skyscraper itself with rise with the rents. So in 20 years all else equal they will be making money hand over fist! Sure they are taking risk on the location of the building, the overall economy, etc. But if they did it right they are mostly using other people’s money to finance the project so they win no matter what.

At the same time deflation scares the heck out of these people because if rent drops they will be unable to meet the loan payments and will go bankrupt. That in turn scares the bank because they don’t want possession of a skyscraper that is ‘under water’. The bank has a degree of influence with the government due to lobbying. So the Fed targets 2% inflation to keep the economy spinning.  The end result is office space, candy, and everything else increases in price little by little in the long run.

The post Inflation - Why Prices Usually Go Up is part of a series on personal finances and financial literacy published at Wealth Meta. This entry was posted in Financial Literacy
Previous Post:

Understanding the Realities of Investing in Real Estate

Is Investing in Index Funds a Good Idea?