Being a Plumber vs. Being a Doctor - Net Worth Simulations 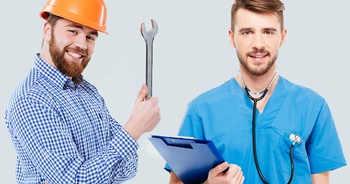 When you think about building wealth, who do you picture with a fat bank account? Do you see your family doctor, your dermatologist or the 25-year-old plumber who came to fix your leaky toilet last week, in dirty jeans and possibly showing a generous amount of crack?

If you’re thinking purely in terms of salary, you’d be right to think of your dermatologist or even your family doctor before the plumber. But an individual’s wealth and overall financial picture is much more complicated than salary.

What do things look like when we look at the bigger picture? Here’s what you can learn about plumbers, doctors (and other career paths) by running some comparisons on the Wealth Meta Income and Spending Simulator.

In running this simulation, I’m using a timeline of 47 years—from age 18, when the path of future doctors and future plumbers start to diverge, both financially and in many other ways as well, to retirement at age 65. Of course, not everyone follows the same path… some people might do a tour in the military before decided whether to go to college, and some people decide to become plumbers or doctors latter in life. For the sake of this piece, however, I’m comparing two people who pursued their chosen career path directly out of high school.

For the sake of comparison, I’m going to assume the doctor and plumber have identical living expenses. That way the comparison focuses on differences in income and debt. So both our doctor and our plumber will get a monthly budget of $1500, which will increase with inflation.

There are two ways to become a plumber: By doing an apprenticeship with an experienced plumber or by attending a trade school. I’m going to assume our plumber chooses to do an apprenticeship for this simulation.

You can start working as an apprentice plumber immediately after high school (or even during high school). It’s on-the-job learning, and yes, you’ll be getting paid. The plumber incurs zero debt from student loans. Nationwide, the median pay for an apprentice plumber is $28,157 annually. Licensing standards for plumbers vary by state, but in most cases an aspiring plumber can get licensed and become a journeyman plumber after 3-4 years as an apprentice. That comes with a pay increase to around $51,672 annually. After about 10 years of experience as a plumber, he or she will be a master plumber and earn, on average $59,926 annually.

This leaves you with a net worth of $4.02 million at retirement age. View the Plumber's simulation here.

The first step to becoming a doctor is an undergraduate degree. That will take four years, and the average graduate will have $37,172 in student loan debt.

The next step is medical school, which takes four years and leaves students with, on average, $183,000 in student loan debt.

After medical school, you’ll need to do an additional three years of residency before you’re a doctor. The good news, though, is you’ll be getting paid. Medical residents earn, on average, $52,931 per year.

Now, after 11 years of training, you’re ready to become a doctor… specifically, a family care doctor, who can expect to make an average of $175,827 per year.

Your ending net worth, at retirement, is $9.46 million. View the Doctor’s simulation here.

So yes, as a doctor, even a primary care physician (among the lowest-paid doctors) you will eventually earn a lot more than a plumber. But it’ll be more than twenty years before a doctor reaches the same amount of assets as a plumber given similar spending and saving habits. The plumber never incurs a negative net worth, whereas the doctor is $390k in the hole after year 8.

This analysis is looking only at the pure numbers, with a contrived budget of $1500 per month that grows with inflation. It does not look at quality of life, quality of work environment, career satisfaction, relative risk, etc. The doctor may not be able to pass their board exams and be stuck with their school debt. The plumber may get injured on the job. Still it is interesting to see that both a plumber and doctor who live frugally can each attain a healthy retirement fund.

The doctor hits $1M in net worth around year 24.

The plumber hits $1M in net worth around year 27.

The doctor his $2M in net worth around year 29.

The plumber hits $2M in net worth around year 36.

It is really the latter years of the doctor’s career that contribute to the extra $4M in total net worth.

One thing we dare not compare is their relative contributions to society - both working pipes and health care are absolute essentials.

The post Being a Plumber vs. Being a Doctor - Net Worth Simulations is part of a series on personal finances and financial literacy published at Wealth Meta. This entry was posted in Personal Finance
Previous Post:

Cryptocurrencies - Get Rich Quick (or not) and Investment vs Speculation

Keep believing this. Its good for my business.

The payscale website is now showing the average for a family doctor at around $181k. Doctors out of school certainly don't start at $299k, and many of them take on substantial debt.

I am a self employed plumber. While the median rings true as to a median salary, the route of a self employed plumber pays substantially more dividends than the proposed numbers. I actually even attended college for 2 years before deciding that the extra expense of living with the tuition bills was more than I could stand to start off with. Currently 32 years old with a current net worth of $2.6m. It’s hard work, but I wouldn’t have chosen any different path if I had it to do over again.

This is a great article. But if you are a self employed plumber who works for themself depending on area you work. We make as much as a doctor if not more.

This article doesn't factor in the potential for the plumber to invest while the doctor is paying off debt. The power of compound interest would make the plumber far wealthier than the doctor, and you wouldn't see that gap for the $2M mark. I'd like to see this model add that factor as a control, same as the expenses - as soon as the individual is debt free, they're investing $5,500 annually at a fix return. How does that impact their net worth? You'll see the plumber keep pace and outpace the doctor. The plumber's monthly expenses could decrease as the mortgage is paid off etc. If the monthly expenses remain the same, we can assume the plumber is enjoying a higher quality of life.

That dope who said a "plumber is plumber is a plumber..." is arrogant and probably just a kid who doesn't have a mortgage, never had a plumbing issue. The value of a plumber's skills are only going to increase as the number of tradesmen decreases. We have an excavation and poured concrete business. We work with other Self employed contractors - plumbers, electricians and carpenters. Only those with children interested in the trades have apprentices. It's a striking indication that in a generation or two, these skills will be almost nonexistent. And when that happens, you'll find that a doctor is a dime a dozen, but the plumber is the kingpin.

Our circle of friends who are tradesmen are far wealthier than most other professionals we know. They may have dirty jeans and no title preceding their names, but we have no debt whatsoever - including three cars, two houses, two kids in private school and we are able to help relieve the financial burden of the people we love. We have the financial freedom to weather a storm without worrying about next month. So, it's only someone who totally ignorant who would pass judgement on tradesmen, because bitch, we got bank.