Being a Plumber vs. Being a Software Developer - Net Worth Simulations 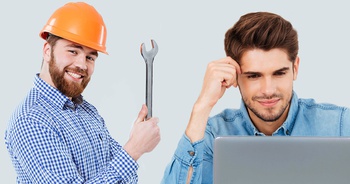 Most likely when you began your career you looked at the amount of income you would earn. You may have decided to become a doctor, lawyer, or even software developer because you thought it would yield more money.

And, if you’re thinking in terms of salary, you might be right. But, a person’s overall wealth is more than just their salary. It involves their debt, spending habits, and how they invest. The Wealth Meta Income and Spending Simulator allows us to dig into these numbers and create a comparison between the two professions.

This simulation is based on a few assumptions. First, we’re using a timeline of 47 years because it’s the average amount of time that someone is eligible to work – from age 18 to age 65. Of course, not every profession begins working at 18.

Everyone begins their career at different times - some people choose to join the military, travel for a few years, go to a trade school, attend a 4 year university, or even earn an advanced degree. For the sake of this analysis, however, we are comparing two people who pursued their careers directly out of high school.

There are two ways to become a plumber: By doing an apprenticeship with an experienced plumber or by attending a trade school. I’m going to assume our plumber chooses to do an apprenticeship for this simulation.

You can start working as an apprentice plumber immediately after high school (or even during high school). It’s on-the-job learning, and yes, you’ll be getting paid. The plumber incurs zero debt from student loans.

Nationwide, the median pay for an apprentice plumber is $28,157 annually. Licensing standards for plumbers vary by state, but in most cases an aspiring plumber can get licensed and become a journeyman plumber after 3-4 years as an apprentice. That comes with a pay increase to around $51,672 annually. After about 10 years of experience as a plumber, he or she will be a master plumber and earn, on average $59,926 annually.

This leaves you with a net worth of $4.02 million at retirement age.

The average salary for a software developer in the first three years out of school is about $65,000. After 10 years of experience, the average salary increases to about $100,000 but it can go considerably higher for people with experience working for major technology companies that offer stock bonuses. Areas with a high cost of living also offer higher salaries.

If this person works for 43 years after beginning work at age 22 or 23, their net worth at retirement will be $7.1 million.

However, we must look at these numbers objectively. Oftentimes the more school a person takes on, the more debt they have, so the aforementioned numbers may not be accurate. Additionally, studies show that when a person earns more, they take on a bigger lifestyle, which means that they spend more of the money that they earn. It is also always possible that each career path takes on its own risks. For example, a software developer may not graduate and be stuck with their debt, or the plumber could get injured on the job and become unable to work in their field.

All in all, a software developer will likely have a higher net worth at retirement than a plumber permitting that both live a frugal lifestyle and that the software developer takes on an average amount of debt at the beginning of their career.

Try building your own simulation (view then save as...) to explore your own assumptions:

The post Being a Plumber vs. Being a Software Developer - Net Worth Simulations is part of a series on personal finances and financial literacy published at Wealth Meta. This entry was posted in Personal Finance
Previous Post:

6 Ways to Exponentially Grow Your Net Worth