Being a Doctor vs. Being a Software Developer - Net Worth Simulations 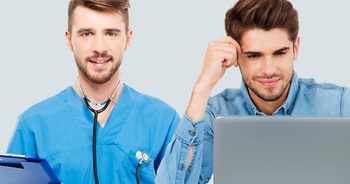 When you picture a wealthy person, who do you envision? Is it a software developer working for a big tech company or a doctor in family practice or in a speciality?

If you’re thinking in terms of salary, you might be right – the doctor is probably the higher earner. However, a person’s overall wealth is more than just how much they make – it has to do with debt, how they choose to spend their money, and where their investments go.

Let’s dig into these numbers a little bit more and learn how any professional can build wealth by running some comparisons on the Wealth Meta Income and Spending Simulator.

In short, let’s assume that a person can work for 47 years – from age 18 to 65. Age 18 is where all paths begin to deviate with some people choosing to take time off before heading to school and others simply beginning to work. In this comparison, we’ll assume that a potential doctor or software developer is going to start their degrees immediately after high school.

For the sake of this comparison, let’s also assume that regardless of schooling or income that all people are living on a budget of $1,500 per month, and that over time these numbers adjust for inflation. This way, we are comparing only the differences in income and education debt for both subjects.

The average salary for a software developer in the first three years out of school is about $65,000. After 10 years of experience, the average salary increases to about $100,000 but it can go considerably higher for people with experience working for major technology companies that offer stock bonuses.

If this person works for 43 years after beginning work at age 22 or 23, their net worth at retirement will be $7.1 million.

After medical school, a doctor must also do a three-year residency that makes an average of $52,931 per year.

After that 11 years of training, a family care doctor can expect to make an average of $183,329 per year.

The net worth at retirement is $10.1 million.

We must look at these numbers objectively. Often, the more school a person takes on, the more debt they have, so the previous numbers may not be accurate. Additionally, studies show that when a person earns more, they take on a bigger lifestyle, which means that they spend more of the money that they earn.

Each career path comes with its risks and rewards. For example, a doctor may not be able to pass their board exams and be stuck with their debt.  Or the software developer could end up in a job that rusts their skill set leaving them way behind current trends which would stagnate their income. Doctors also carry the the risk of a malpractice lawsuit.  For software developers the expectation of working until age 65 may be unrealistic due to age bias in the industry and the ever changing technology.  On the plus side for doctors there are debt forgiveness programs which would be a huge windfall, and for some lucky software developers their stock options go IPO and become worth millions.

All in all, a doctor will likely have a higher net worth at retirement than a software developer permitting that both live a frugal lifestyle and that they take on the average amount of debt in beginning their careers.

It is really the latter years of the doctor’s career that contribute to the extra $3M in total net worth.

Try building your own simulation (view then save as...) to explore your own assumptions:

One thing this simulation does not address is relative career satisfaction, working conditions, contributions to society, etc. This is just a look at the raw numbers and how the math compares.

The post Being a Doctor vs. Being a Software Developer - Net Worth Simulations is part of a series on personal finances and financial literacy published at Wealth Meta. This entry was posted in Personal Finance
Previous Post:

How to Organize and Secure Your Financial Documents

Yeah, however, current technology especially medical tech is getting better and better. in 40 years doctors may be put out of business by machine learning developers who will be making more as technology stocks grow. Fin

I just hit 300k TC in tech, living in PA with moderate cost of living.

I'm 35, and that's not even high compared to the top end engineers. Though for first 6 years of my career I was just doing IT support work so I guess my career time doing actual engineering has only been about 7 years.

Only a bachelors and paid off all my student debt years ago, lol.

Wait @Lol (the guy making 300k) that's crazy can I talk to you? I'm a college student going in between these two fields. I have the prereqs done to do either.

Doctors and people who are in medical are always overpaid. There is no govt. rule for them for taking extra money .

There is a 99% chance that we'll NEED doctors for the next 50-100 years. Now some people may argue that there will be robots that will replace doctors, however robots can't replace EVERY doctor, robots can't just be put in place of every doctor out there, doctors will be in demand for at least the next century. However, a lot of people are going into CS, and the value of a software engineer may decrease, I know because I'm in high school and that's what everyone wants to be.

If you believe that a physician is overpaid, you are wrong. How much is a primary care physician gets paid, sometime just $75 per hour or even less. I dropped my Benz to the dealership, the technician lab fee is $70 per hour. So you think the doctor (takes care your health) should be paid less than a technician (takes care of your car)?